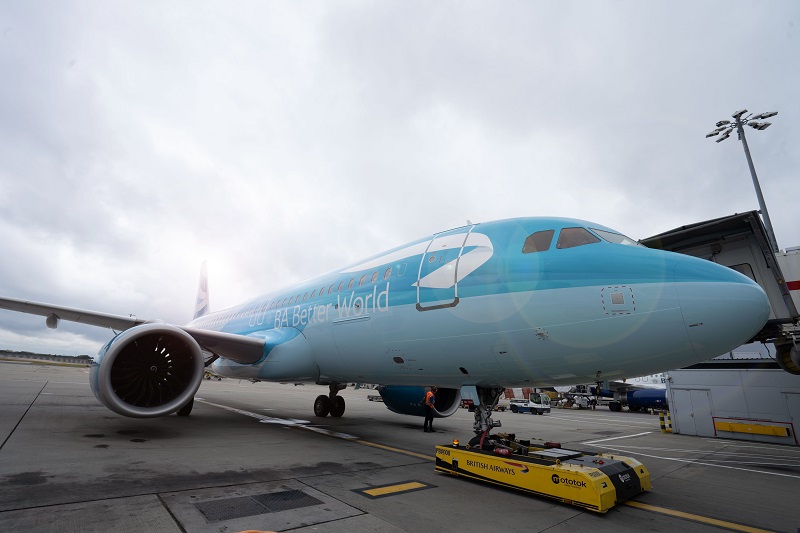 The British Airways BA1476 from London Heathrow to Glasgow Airport became the airline’s first ever passenger flight to be powered directly by sustainable aviation fuel (SAF), with the remaining emissions produced by the flight offset.

The airline teamed up with Heathrow, air traffic service provider NATS, fuel giant bp, Glasgow Airport and Airbus to operate the short carbon neutral flight, which departed Heathrow at 10.36 on September 14 and arrived in Glasgow at 11.28 local time.

The short journey on the airline’s new special liveried sustainability aircraft painted in partnership with Airbus replicated a flight British Airways operated to Edinburgh in 2010. At the time, neither offsetting nor sustainable aviation fuel were available to reduce the flight’s impact on the environment, and the journey was operated on an older aircraft carrying fewer passengers.

The aim of this week’s flight was to show how far the aviation industry has progressed in its efforts to decarbonise over the last decade.

The flight was operated by an Airbus A320neo, the quietest and most fuel-efficient short-haul aircraft currently in British Airways’ fleet.

British Airways’ Chairman and CEO Sean Doyle described the flight as a glimpse of the future. He said: “This flight offered a practical demonstration of the progress we’re making in our carbon reduction journey. By working together with our industry partners we’ve delivered a 62% improvement in emissions reductions compared to a decade ago.

“With BA Better World, we’re making progress on our journey to a sustainable future and have adopted a range of short, medium and long-term initiatives to get us to net zero emissions. Together, we can build a future for aviation that delivers the wonders of air travel while reducing the impact on the environment.”

NATS CEO Martin Rolfe said: “Live demonstrations like this show just what is possible and are an important step on the aviation industry’s path to net zero by 2050. We can learn a lot from flights like these, as they help us understand how to redesign the airspace over the UK and play our part in making flying sustainable for the future.”

Airbus’ Executive Vice President Corporate Affairs and Communications Julie Kitcher said: “The A320neo is a great example of how far our industry has come. It meets all the ICAO environmental standards thanks to advances in engines, aerodynamics, cabin and flight operations.

“Together with our industry partners, we want to bring the first zero emission commercial aircraft to the market by 2035. Perfect Flight is a clear example of how together we can achieve impressive results.”