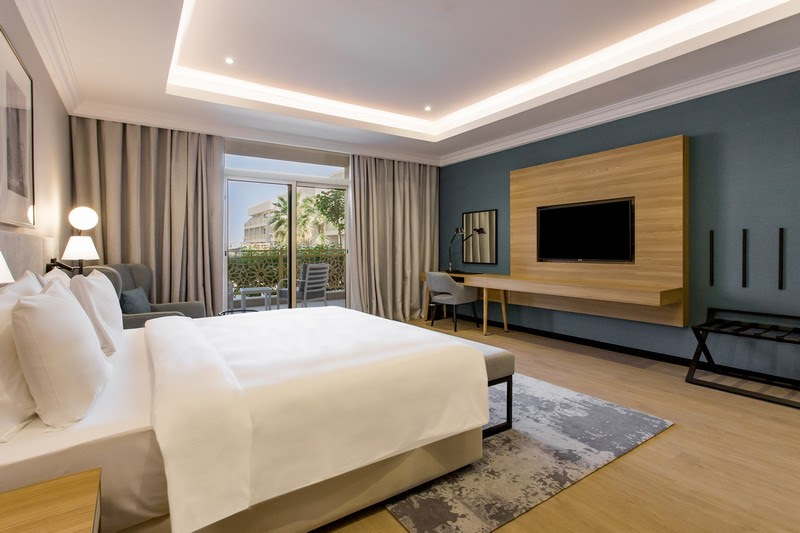 Radisson Hotel Riyadh Airport features 471 rooms including duplex suites, three-bedroom villas and family connecting rooms with a wide range of amenities such as coffee machines and rain-showers to make each guest’s stay memorable. The family villas are equipped with private pool, separate living area, dining area with fully-equipped kitchen and washing machine, spread over three floors making them ideal for those planning an extended stay or looking for extra space.

The hotel features two dining options that offer both international and Arabic dishes. Start the day right with a ‘Super Breakfast’ on the terrace of Lune, or enjoy all-day dining from the extensive à la carte lunch and dinner menu. Kasbah Café on the ground floor offers a variety of light international dishes and shisha on the pergola terrace.

Tim Cordon, Area Senior Vice President, Middle East, and Africa, at Radisson Hotel Group, says, “We are delighted to welcome our first airport hotel to Riyadh and bring an additional brand from our portfolio to the capital. The Kingdom of Saudi Arabia remains a key development area for us, evident in our fast expansion within the country aligned with Saudi Arabia’s Vision 2030. We are thrilled for guests to experience this upscale hotel brand which enables guests to focus on a work/life balance and find harmony in their travel experience.”

Christopher Pike, General Manager Radisson Hotel, Riyadh Airport comments, “With an ideal location next to the King Khalid International Airport and the perfect mix of rooms, duplex suites, and villas, we can offer something for everyone.”

With the health and safety of guests and team members as its top priority, Radisson Hotel Riyadh Airport is implementing the Radisson Hotels Safety Protocol program. The in-depth cleanliness and disinfection protocols were developed in partnership with SGS, the world’s leading inspection, verification, testing and certification company, and are designed to ensure guest safety and peace of mind from check-in to check-out. The Safety Protocol is an integral part of Radisson Hotel Group’s Safety and Security program ensuring we always care for our guests and team members.

The Radisson Group has announced plans to open 20 new hotels over the next three years in key Saudi cities including Makkah and Jeddah as part of its big expansion strategy for the kingdom, offering a total of 1,600 rooms. This will be added to the 24 hotels, resorts and hotel units currently being operated by the group in the kingdom.

Radisson Group CEO Federico Gonzalez said it aims to boost its investment portfolio in the kingdom to around 50 per cent of its total investments in the Middle East by 2026. The group is set to open a regional office in Riyadh this year to support plans to double its operational portfolio by adding more hotels in various regions, corresponding to its five-year plan to create more job opportunities.

“The commitment of Radisson Hotel Group to developing new hotels in Saudi Arabia and opening a regional office in Riyadh is an effective contribution to enhance the steps taken by the kingdom to achieve its goal of receiving 100 million visits by 2030,” he stated.

Gonzalez was speaking to the media following a meeting with the Minister of Tourism Ahmed Al-Khatib. The Radisson move will be a major boost to National Tourism Development Strategy, which aims to make available 854,000 new hotel rooms, 70 per cent of which will be financed by the local and foreign private sectors, in line with Vision 2030 target to hit the 100 million visit benchmark in the next 10 years, thus putting the tourism sector’s contribution to the country’s GDP at 10 per cent and create one million new jobs.