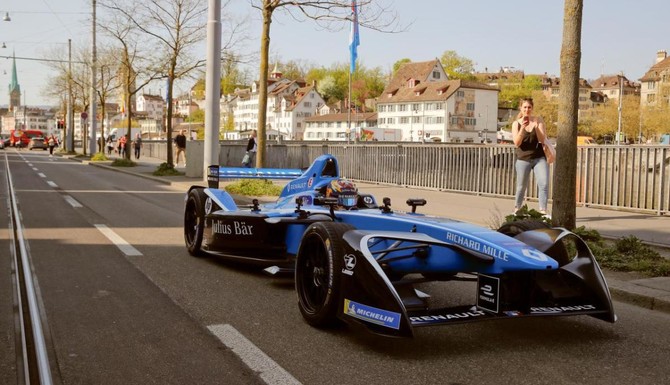 The ABB FIA Formula E World Championship from January 28 to 29, 2022 in Riyadh will be the most progressive season to date for Formula E’s sustainability standards.

The Season 7 (2020/2021) Sustainability Report released details a series of notable ‘firsts’ in sustainability achieved and implemented during the year by Formula E and its wider ecosystem of teams, partners and stakeholders, reflecting the Championship’s mission of accelerating the adoption of electric vehicles through elite sport.

The new Gen3 racing car was unveiled by Formula E and the FIA, setting the benchmark for sustainable, high performance racing cars.  When it enters competition in Season 9, the Gen3 will be the world’s most efficient racing car with 40 per cent of the energy in a race coming from regeneration, and will be certified net-zero carbon.

Formula E became the first sport in the world to join the Science Based Targets initiative (SBTi) and the Business Ambition Pledge for 1.5°C commitment. Formula E will further reduce its emissions by 45 per cent by 2030.

A pioneering programme to ensure damaged chassis parts collected since Season 1 are given a second life was introduced.

The Heineken Greener Bar was launched in July at the 2021 Heineken London E-Prix, delivering the first sustainable bar concept aimed at reducing waste, water, emissions, and energy usage at events.

Formula E was awarded the top three-star rating in the FIA Environmental Accreditation Programme for a third successive time, the first Championship to achieve the standard.

Starting in Season 7, tyre allocation was reduced by 25 per cent for a single race competition and up to 50% at double-header competitions. Compared to the Season 5 calendar, this results in saving of up to 720 tyres and a 29 per cent reduction in emissions.

Formula E became the first global sports organization to partner with Unicef on climate change. The partnership will empower three million children around the world to become agents of change against climate crisis over the next three years.

Formula E renewed its NZC status by offsetting all unavoidable emissions from its Season 7 footprint into a renewable energy project based in Mexico with social benefit for local communities.

At COP26, the ABB FIA Formula E World Championship was one of the most active elite sports to participate in the global conference: Representatives from across the Championship ecosystem including the FIA; investor Liberty Global; partner Julius Baer; and teams Mahindra Racing and ROKiT Venturi Racing led a series of sustainability debates.

Julia Pallé, Formula E Sustainability Director, said: “I am delighted to release our Season 7 Sustainability Report and showcase another strong year of leadership for sustainability in sport. We have set ourselves further ambitious targets in Season 8 and are focused on continued, measurable progress.”

Jamie Reigle, Formula E CEO, said: “Our world faces ongoing environmental, social and economic challenges and Formula E is committed to ensure everything we do leaves positive, tangible legacies. As we look ahead to Season 8 and the full return of fans to all Formula E events, I am excited at the prospect of once again using our unique global platform to champion the fight against climate change. We hope to inspire individuals and communities around the world to believe that adopting a sustainable lifestyle does not require compromise.”

The Saudi Ministry of Sports announced the launch of ticket sales for the first and second rounds of Season 8 of the ABB FIA Formula E World Championship at an event in At-Turaif in the historic Diriyah earlier this month.

The announcement took place in the presence of officials from the Ministry of Sports, Alberto Longo, Formula E Co-Founder and Chief Championship Officer, Carlo Boutagy, CEO and Founder of CBX, the event promoter, as well as the champion of the last edition of the Formula E race at the Diriyah Circuit, British driver Sam Bird.