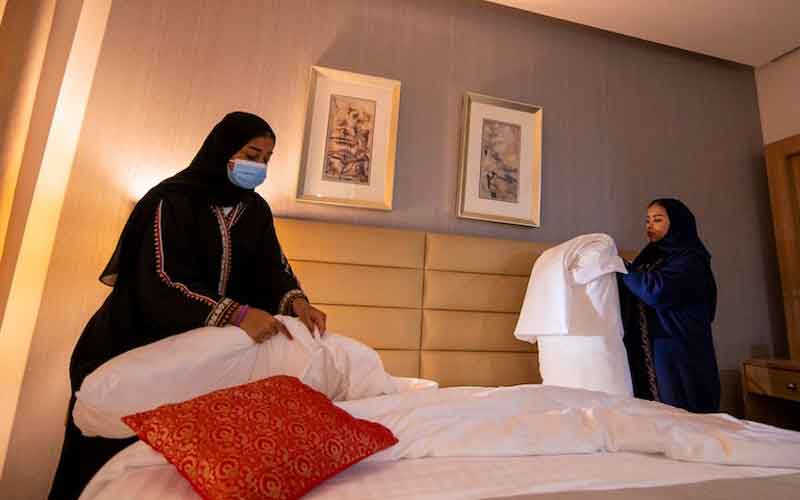 More than 6,000 Saudis are currently being trained up for technical roles in the Kingdom’s growing tourism industry, according to the government agency leading the charge, said a report in Arab News.

Saudi Arabia’s Technical and Vocational Training Corp (TVTC) has announced it is currently training 6,189 people in preparation for jobs in the tourism and hotel industries. The Kingdom’s tourism sector continues to grow, with the Kingdom expecting to attract 100 million annual visitors and creating one million jobs by 2030.

TVTC spokesperson Fahad Alotaibi said the entity focuses on designing and providing specialized training programs to train citizens to work in this sector and lead its facilities through diversified training programs in the tourism and hospitality fields.

TVTC’s aims align with Saudi Vision 2030, under which efforts are exerted to cut the unemployment rate in the Kingdom from 11.6 per cent to 7 per cent by 2030.

In August this year, TVTC announced that it had received more than 230,000 trainees — new starters and returnees — in over 260 training facilities and partnership institutes distributed throughout the Kingdom.

To achieve its Vision 2030 goals, Saudi Arabia is not only encouraging the recruitment of nationals to private sector jobs, but is also encouraging adequate investment in their future to ensure their retention by employers as well as their contribution to a vibrant and diverse economy.

Saudization, officially known as the Saudi nationalization scheme, or Nitaqat, is considered a crucial step towards economic success.

Saudi Arabia launched the ‘Saudization’ labor market strategy to enhance the economic participation of its citizens, with the aim of reaching 60 per cent by 2030. Although the process of Saudization has been going on since 1985, major regulatory and economic reforms have accelerated in recent years under the Vision 2030 agenda, with the aim of increasing the participation of young Saudis in the economy, promoting non-oil sectors and improving the overall quality of life.

According to Saudi Arabia’s Central Department of Statistics and Information, the unemployment rate in the Kingdom decreased to 5.80 percent in the second quarter of 2022 from 6 per cent in the first quarter of 2022.

Vision 2030 promotes Saudi women as an important part of the Kingdom’s strength. It aims to develop their talents, invest their energies, and provide them with the right opportunities to build their futures, contributing to the development of society.

Saudi women now comprise 33.6 percent of the Saudi workforce as of March 2022, according to the General Authority for Statistics. That figure is up from 17.4 percent just five years ago.

The unemployment rate of women was the lowest in 20 years as of the first quarter of 2022, falling to 20.2 percent from 22.5 percent during the fourth quarter of 2021.

Cathay Pacific to purchase 38m US gallons SAF from Aemetis