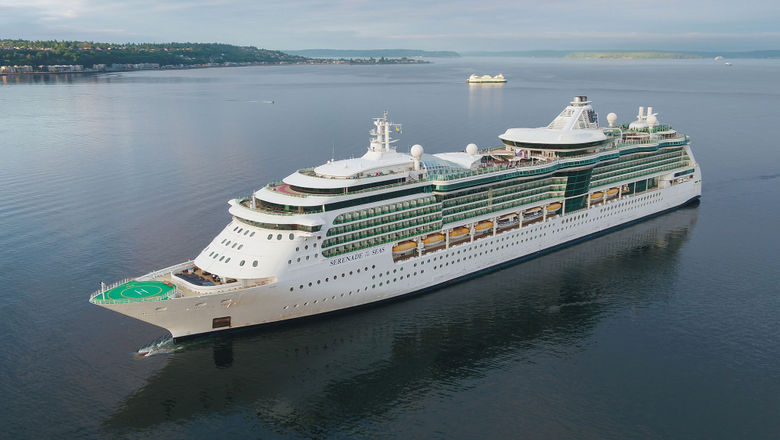 Royal Caribbean International is raising the bar for world cruises with the debut of its inaugural Ultimate World Cruise, an epic 274-night adventure that visits all seven continents, more than 150 destinations in 65 countries and 11 great wonders of the world.

Sailing aboard the Serenade of the Seas, the longest and most comprehensive world cruise out there, the journey will begin from Miami on December 10, 2023 through September 10, 2024. Bookings for the full Ultimate World Cruise is now open with an exclusive one-week window through October 26 for Royal Caribbean’s Crown & Anchor Society Diamond status members and above.

Travelers will sail to 57 destinations new to the cruise line and exclusive to the cruise itself. Highlights include Casablanca, Morocco; Qaqortoq, Greenland; and Shimizu, Japan – the gateway to Mount Fuji. Guests can delve deep into many of the world’s breathtaking wonders, from Peru’s Machu Picchu to the Taj Mahal in India, and experience distinct cultures and picturesque shores at every corner of the world all in one spectacular adventure – only on Royal Caribbean.

“This is the world cruise of world cruises,” said Michael Bayley, president and CEO, Royal Caribbean International “Now more than ever, people have resolved to travel the world and make up for lost time. Royal Caribbean is making that a reality with the ultimate vacation that welcomes those seeking adventure and exploration to taste, dance and dream with us around the world. To travelers asking themselves where they should go next, we say everywhere.”

Guests can also choose from four other exciting expeditions, that will offer a wide range of destinations from December 2021 in the Americas, Asia-Pacific, the Mediterranean and Northern Europe:

Round the Horn: Americas and Antarctica Expedition sails from Dec. 10, 2023 to Feb. 11, 2024 will begin in Miami and cover three continents and 36 destinations before ending at Los Angeles. The journey will break at world wonders along the way in Central and South America, including Chichen Itza in Cozumel, Mexico; Christ the Redeemer, in Rio de Janeiro, the Iguazu Falls near Buenos Aires, Argentina and at the UNESCO World Heritage Site, Machu Picchu, in Peru.

Wonders of Asia and the Pacific Expedition: Starting Feb. 11 until May 9, 2024, the journey will cover three continents and 40 destinations including stops in Australia, New Zealand, the South Pacific, China and India, ending in Dubai.

Middle East Treasures and Marvels of the Med Expedition: Starting May 9 until July 10, 2024, the cruise begins in Dubai and ends in Barcelona, covering three continents and 44 destinations including Jordan’s lost city of Petra, the Pyramids of Giza in Egypt, Temple of Artemis in Ephesus, Turkey and the Colosseum in Rome.

Capitals of Culture: Starting July 10 until Sept. 10, 2024, the route will be the final leg of the Ultimate World Cruise covering 40 destinations for an immersive, cultural experience. It starts in the Mediterranean and heads north, visiting Morocco; St. Petersburg, Russia; and Norway en route to New York and finally, Miami.

Tourism is vital for global economic recovery in 2022: UNWTO