Royal Caribbean bring home the new ‘Wonder of the Seas’ 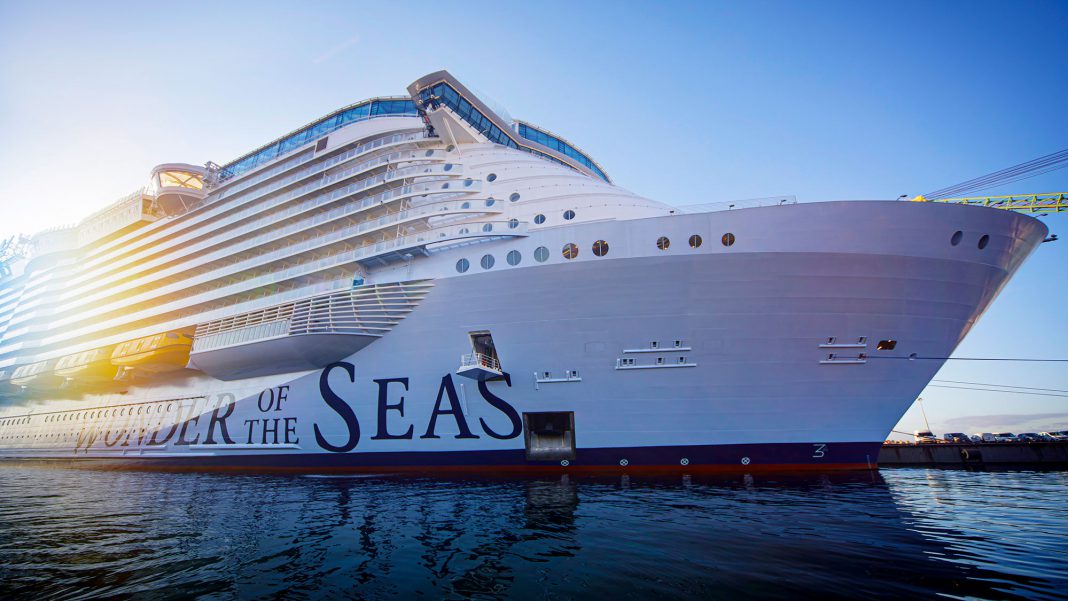 Royal Caribbean International took delivery of its newest ship, the Wonder of the Seas, from the Chantiers de l’Atlantique shipyard in Marseille, France.  At 1,188 feet long and weighing 236,857 gross tons, the 6,988-passenger cruise ship takes the title of “world’s largest cruise ship” from its fleet-mate Symphony of the Seas.

The fifth ship in Royal Caribbean’s Oasis class will make its official debut in Fort Lauderdale on March 4, launching seven-day cruises to the Caribbean. The Wonder will reposition to the Mediterranean this summer, sailing cruises from Barcelona and Rome.

Other new onboard offerings include the Wonder Playscape, an open-air, underwater-themed kids’ play area that comes complete with slides, climbing walls and an interactive, touch-activated mural, plus puzzles and games. Elsewhere, the dynamic Caribbean Pool Deck features ‘The Perfect Storm’, a trio of high-speed waterslides and kids’ aqua park, ‘Splashaway Bay’; plus, in-pool loungers, surrounding casitas, live music and more.

The ship will also introduce the Vue, a cantilevered bar high above the pool deck that has a colorful mosaic canopy overhead after sunset, the new Mason Jar Southern Restaurant & Bar serving staple American southern fare and new takes on classic dishes in a warm farmhouse-style setting, complete with live country music.

Wonder of the Seas will make its debut on March 4 in Fort Lauderdale, Florida, and then sail a series of seven-night Caribbean cruises visiting the line’s private island destination, Perfect Day at CocoCay; Nassau, Bahamas; Roatan, Honduras; and San Juan, Puerto Rico; prior to crossing the Atlantic to Barcelona in May; then, onward to Rome to offer an exciting lineup of Mediterranean voyages.

The Wonder will return to Florida to sail year-round out of Port Canaveral, starting in November.

“Wonder of the Seas will energize cruising in a bolder and bigger way. Adding this ship to our already best-in-class fleet elevates the company in continuing to lead the industry with new features and innovation,” said  Royal Caribbean Group President and CEO Jason Liberty. “This is one more way that we’re delivering world-class and memorable vacations, responsibly, to guests around the world.”