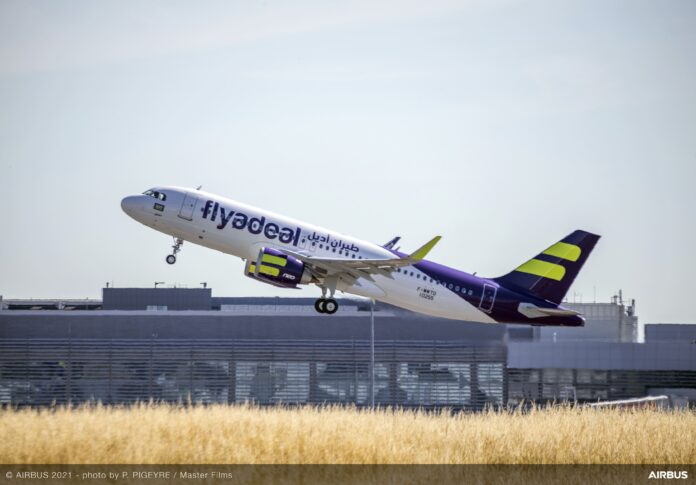 flyadeal, Saudi Arabia Airlines’ the low-cost carrier, has taken delivery of a new A320neo, the first out of 30 to be delivered in the next three years.

The aircraft is the first out of 65 A320neo family aircraft ordered by Saudi Arabian Airline at the Paris Airshow 2019, and will join flyadeal’s all Airbus fleet. Powered by CFM LEAP-1A engines, the A320neo will offer flyadeal outstanding operational, economic and environmental performance.

flyadeal’s A320neo is configured with 186 seats in a comfortable all economy class layout. Passengers onboard the aircraft will benefit from the widest cabin of any single-aisle aircraft in the sky, as well as the latest cabin feature offering optimum passenger comfort.

The A320neo is the ideal aircraft for flyadeal to grow and expand its domestic and regional network. Demonstrating the operational flexibility of the A320neo, the aircraft will allow the airline to efficiently enhance its operations to additional networks and foster closer links with countries across the region and beyond.

The A320neo Family incorporates the very latest technologies including new generation engines, Sharklets and aerodynamics, which together deliver 20% in fuel savings and CO2 reduction compared to previous generation Airbus aircraft. The A320neo Family has received more than 7,400 orders from over 120 customers. –

‘Agents have a crucial role to play in travel recovery’