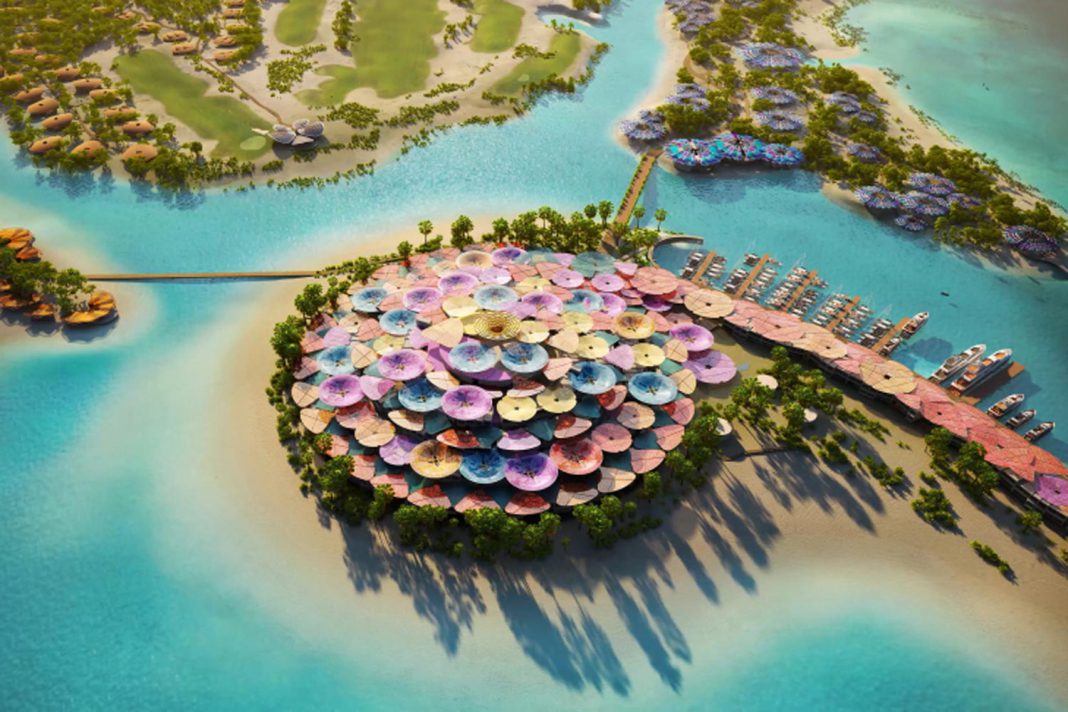 The global pandemic may have affected Saudi Arabia’s newly minted tourism plans, after the Kingdom opened its doors to international tourists for the first time as part of a broader push to cut its economic dependence on oil, but this did not deter the Kingdom’s vision to spend over $1 trillion in tourism and attract 100 million visitors by 2030.

The Kingdom is looking to pivot from religious to leisure tourism, which it views as being a key sector in its Vision 2030 program with aims to modernize the country’s economy. This is also expected to see the addition of 310,000 hotel rooms at a cost of $110 billion, according to global property consultancy Knight Frank.

Surely enough, a rebound was imminent. Riyadh, Dammam and Jeddah witnessed revenue per available room recovery index rates of 88 per cent, 85 per cent and 56 per cent, respectively, in 2021, as recently reported by the US-based hospitality research company STR. Furthermore, the pace of growth is set to gather steam as the Kingdom’s Vision 2030 reform program aims to attract 100 million annual visitors within eight years.

The reforms will also focus on T&T outside the traditional destinations of Hajj and Umrah and in line with national giga projects such as NEOM and The Red Sea Development Company.

“There is a palpable excitement about Saudi Arabia – not just locally, but globally,” said Philip Wooller, area director, Middle East & Africa at STR.

According to STR, over 30,000 hotel rooms are currently under construction in the Kingdom. “STR’s findings clearly point to ongoing and sustained recovery. We are looking forward to exploring the vast untapped potential of the Kingdom’s burgeoning tourism sector,” said Danielle Curtis, exhibition director of Arabian Travel Market.

Experts believe that Saudi Arabia holds the potential to become a significant player as it takes aim at travelers from every segment of the market. The next 10 years will change the face of Saudi hospitality as the country has laid down the foundation of transformation in the sector, according to Turab Saleem, head of hospitality, tourism and leisure consultancy at Knight Frank in the Middle East and North Africa.

“Saudi Arabia, Dubai and Qatar are putting the region on the international global tourism map more strongly and forcefully. Currently there are half-a-million keys under development within Egypt, UAE and KSA.” he added.

To enable this, events and campaigns such as Riyadh Season, along with growing consumer confidence in travel, have benefitted both Riyadh and Jeddah as key travel hubs in the Kingdom in the second half of 2021, and this is expected to continue having a positive impact on hotel demand in 2022. The forecasted occupancy for 2022 in Riyadh is 65 per cent with 54 per cent projected for Jeddah, representing a respective 12 and 7 per cent increase.

Several new announcements for new hospitality projects that will drive further growth and development in Saudi Arabia were announced including:

• Diriyah Gate Development Authority (DGDA) has unveiled its vision for Diriyah Square, the commercial heart of its SR190 billion ($50 billion) Diriyah giga-project on the edge of Riyadh, Kingdom of Saudi Arabia, scheduled to be open by 2024. To date, 16 international hotel brands have been confirmed at the Diriyah Gate Development and it is expected there will be 38 in total.

• The $15 billion AlUla masterplan will be developed in three phases in 2023, 2030, and 2035. The plan involves a broad range of initiatives across archaeology, tourism, culture, and education, and the arts and reflecting Vision 2030’s goals in economic diversification, local community empowerment, and heritage preservation. By 2035, The site will have 9,400 hotel rooms, and 2 million visitors a year are expected upon completion.

• The AMAALA coastal-based development project will feature 30 hotels and 3,000 hotel rooms. The large-scale mixed-use project is expected to receive around a million visitors a year.

• The $13 billion (SR50 billion) mega-development project Asser Tourism Masterplan is set to turn the Aseer region on the Red Sea coast into a tourism hub, set to attract more than 10 million domestic and international visitors by 2030. The project, themed ‘The Arabian Highland’, aims to be a sustainable tourism destination offering midscale experiences. The region, known for its agricultural sector, is gradually turning into a modern tourism and hospitality landmark, emphasizing its high mountain peaks and natural resources.

Besides this, Accor hospitality group consolidated its support to the Kingdom of Saudi Arabia’s vision for 2030 with plans to open over 6,000 keys in the next three years, with key properties including Banyan Tree AlUla, Swissotel Living Jeddah, Fairmont Serviced Residences Riyadh and Novotel Thakher City Makkah.

Additionally three new luxury hospitality agreements were signed with the Ritz-Carlton Reserve, Miraval hotels and Rosewood Hotels, to operate resorts in the first phase of development at the Red Sea destination.

Saudi Arabia’s varied landscapes, from snow-topped mountains to green mountains to beautiful, lush valleys, great cultural experiences, a rich gastronomy, and preserved authenticity, with 7,000 years of history means more opportunities for the Kingdom to be a global player in the global tourism arena.

Most recently, Saudi Arabia moved up 10 places to 33rd in the world overall, in the 2021 World Economic Forum (WEF) Travel and Tourism Development Index, released at Davos. The World Economic Forum’s Travel and Tourism Development Index is a key indicator of Saudi Arabia’s extraordinary journey as a global tourism leader. Saudi Arabia’s leadership, resources and ambition are driving the monumental growth of the sector and delivering on Vision 2030 goals.

His Excellency Ahmed Al Khateeb, Minister of Tourism of Saudi Arabia said: “I am proud of the progress the Kingdom has made through our Vision 2030 reforms as we have opened to the world. Our success is demonstrated by our strong investment in the tourism sector – from creating jobs opportunities for citizens to working with global partners who are invested in our transformation.”

“Our ranking is proof that since 2019, despite the global pandemic, Saudi Arabia has demonstrated incredible global leadership as a new tourism destination. We have made it easier to invest and create tourism businesses in the Kingdom. Last year saw a record for domestic visits. And top global companies are recognizing our commitment and are joining us.”

This significant improvement in Saudi’s ranking reflects not only considerable investment into tourism but also its global leadership in future-proofing the sector. Focused on sustainable and resilient development, Saudi is bringing together key players in the sector to build a future for tourism that is better for all.

Is the Metaverse here to change travel as we know it?