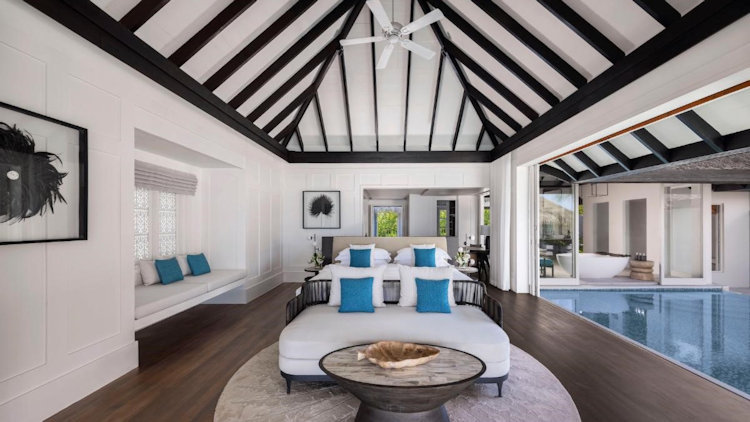 Naladhu Private Island, the luxury island resort in the Maldives, is due reopen its doors again this November, following a complete renovation during a six-month closure.  The resort is undergoing a total redesign with the public areas and accommodation being renovated and the resort’s top suite, the two Bedroom Pool Residence, reopening with its own 20-metre private beach.

Located on the edge of a pristine lagoon in the South Malé Atoll, Naladhu Private Island is 30 minutes by speedboat from Velana International Airport in Malé.

“The 20 ‘Houses’ of the resort is being redesigned by New York-based designer Yuji Yamazaki, with new sleeker furniture throughout and a lighter colour palette creating a modern colonial South East Asian style,” said a spokesperson for the resort.

The restaurant, bar, wine cellar and gym are among the public areas receiving a new look. The resort’s two categories of Houses, each with 300 sq m of living space, are surrounded by tropical vegetation.

The resort’s two categories of Houses, each with 300 sqm of living space, are surrounded by tropical vegetation. The Beach House with Pool has direct access to the white sands and lagoon, whilst the Ocean House with Pool and Private Beach Cabana has a large terrace with ocean view, in addition to its own dedicated cabana.

Each House will be named after an indigenous Maldivian flower or plant that can be found on the island, with each chosen flora growing alongside in the House’s garden.

The guest experience at Naladhu will be completely bespoke. The Kuwaanu, deriving from storyteller in Dhivehi the Maldivian language, will be at guests’ disposal 24 hours a day, as a guide and to provide services ranging from unpacking or serving early morning coffee to organizing a private island picnic.

“The resort will also introduce some new experiences, including a snorkeling tour with the in-house marine biologist to see some of the 2,000 species of tropical fish and sea mammals and to understand more about the coral conservation program,” the spokesperson added.

The jewel in the resort’s crown is the 600 sq m Two Bedroom Pool Residence, that occupy up to 6 guests, benefits from both sunrise and sunset views, with its pool and large deck facing the ocean, along with loungers, al fresco dining area and a swing, and its private beach offering direct access to the lagoon.

As part of the sustainability program, Naladhu has started working with Parley Air to reduce marine plastic pollution and recycle plastic waste, plus all single use plastic has been banned on the island.

Educating guests about the Maldives’ ecosystem and locale will also be a priority when the resort reopens, including guided walks of the island to learn about the flora and fauna and private sessions with the marine biologist focused on the ocean and coral.

In addition, the resort’s furniture from pre-renovation has been donated to the Maldives’ only hospital for mental health.

Naladhu Private Island will be renewing its focus on wellness with a new spa treatment area including a double treatment room with a bathing and changing area. A Naturopath and Nutritional Therapist will also be resident on the island.