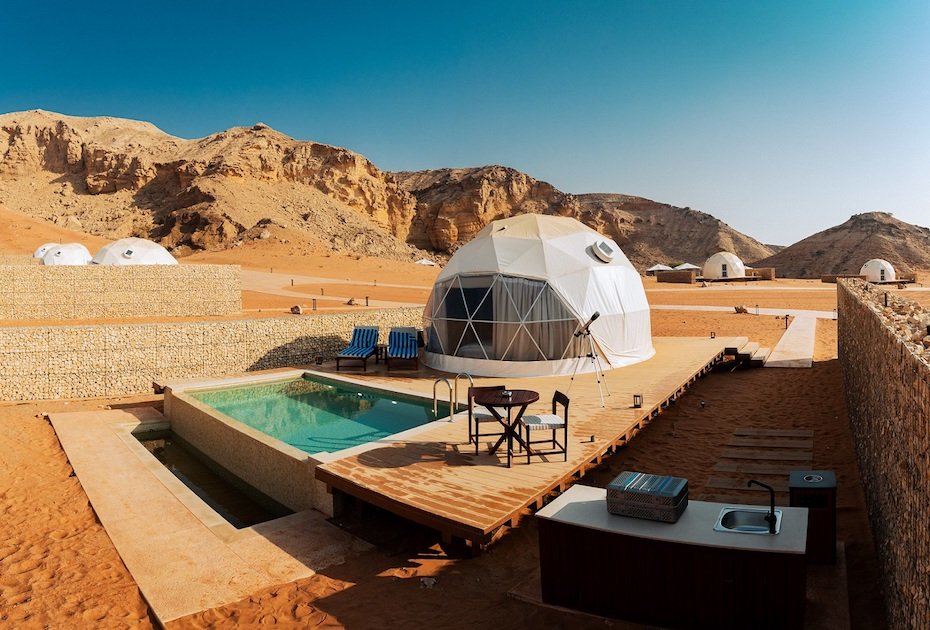 The Sharjah Investment and Development Authority (Shurooq) has announced that the Mysk Moon Retreat is now open for guests to experience the emirate’s first-of-its-kind luxury glamping destination.

The Mysk Moon Retreat comprises 10 single-bed domes with private pools, four family tents with private pools, and two single-bed tents. Each unit is self-sufficient and fitted with essential amenities. It also includes a private barbeque area, in addition to a lobby, and a common area. Guests at Mysk Moon Retreat will have access to a range of activities offered by Shurooq’s tourism destinations in Mleiha, and can also access the retreat’s restaurant and café.

Marwan bin Jassim Al Sarkal, Executive Chairman of Shurooq, said: “With Mysk Moon Retreat now welcoming guests and bookings, this marks an exciting expansion of Shurooq’s portfolio of boutique hospitality offerings in the central region of Sharjah. It is the latest destination in a series of projects developed here, namely, the Mysk Al Faya Retreat, Mleiha Archaeological and Eco-tourism, and the Mleiha Archaeological Centre.”

Al Jabal Resort: The beach resort overlooks the pristine waters of the Soueifa Beach, situated between Khorfakkan Beach and Luluya Beach, and comprises 45 eco-friendly units with choices of 1, 2 and 3 bedrooms, and a private royal suite with swimming pool. In addition, the 187,000 sq m project which is being developed on the slopes of the Al Soueifa mountain, will feature a restaurant, gym, kids play zone, reception, and lobby.

Various attractions around the project will be connected via walking routes and tracks with a completion date set for March 2022.

5-star Hotel in the City of Kalba: A new hospitality project in Kalba on Sharjah’s eastern coast, the new hotel sits next to the Kalba waterfront project. Shurooq’s new 12,500 sqm project lies in the vicinity of the region’s renowned diving locations. It includes 80 units, two restaurants including a café in the lobby, a gym, spa, swimming pool and meeting halls.

Al Bridi Resort and petting zoo in Al Dhaid: Shurooq’s latest tourism attraction in Sharjah’s central region is being developed in partnership with the Environment and Protected Areas Authority, as part of the Sharjah Safari project – the largest safari in the world outside Africa, it is expected to start at the end of this year. Al Sarkal also announced that Shurooq has started developing Al Dhaid Farm, the city’s first petting zoo experience, near The Flag Square in Al Dhaid.

Shurooq also announced it has begun plans to expand both Mysk Kingfisher Retreat in Kalba and Mysk Al Badayer Retreat in the natural dunes of Al Badayer, in response to the growing demand which both destinations experienced over the past years.