Museum of the Future opens its doors in Dubai 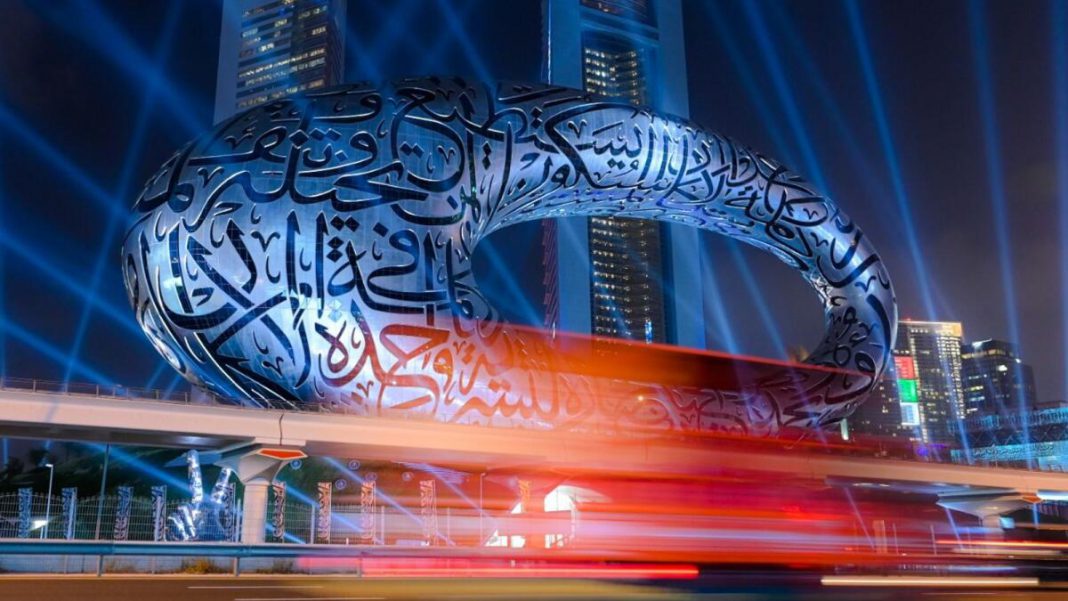 The Museum of the Future opened its doors in Dubai, on a historically significant palindrome date, on 2-2-22, promising to be the most high-tech attraction in the country.

Located next to the Emirates Towers on Sheikh Zayed Road, the museum signifies a peek into the world 50 years from now, exhibiting and predicting how next-generation solutions —  from artificial intelligence to augmented reality and identifying potential threats — can enhance and revolutionize humanity and the global economy for the better.

The building is an “architectural and engineering marvel, confidently straddling the past and the future and applying advanced technology to traditional artforms,” according to authorities in the UAE.

It also ‘speaks Arabic’ – the facade is a canvas for the poetry of sheikh Mohammed Bin Rashid Al Maktoum rendered in the calligraphy of Mattar bin Lahej. Of the three quotes enveloping the facade, one translates to: “The future belongs to those who can imagine it, design it and execute it. It isn’t something you await, but rather create.”

The form is futuristic, with the building hoping to “open a new path away from the high-rise towers that dominate skylines everywhere,” especially in Dubai. Made out of a 1000 individual fiberglass and stainless steel frame, the development was designed by architecture firm Killa Design, and has already been recognized by National Geographic as one of the world’s 14 most beautiful museums.

Inside guests can expect to find immersive future environments that merge science and technology while outside, the museum has a garden with 100 plant species reflecting the UAE’ heritage and biodiversity. Trees and plants, from ghaf and sidr, to palm and acacia trees, are all sprouting from the green plateau where the building stands. The museum is also the headquarters for the city’s Great Arab Minds initiative that aims to identify 1,000 exceptional Arab talents across key fields.

The Museum of the Future is an initiative from the Dubai Future Foundation. The organization was formed in 2016 by Sheikh Mohammed bin Rashid Al Maktoum, prime minister of the United Arab Emirates and ruler of Dubai. The museum claims it will be a gateway to a future world, crafted by visionary designers, artists and filmmakers.

The museum combines elements of exhibition, immersive theatre and themed attractions and visitors will have the chance to engage with this game-changing technology.

Each floor of the museum is designed like an expansive, interactive movie set, brought to life by expert storytellers, technologists and visionary artists. Topics in focus include the future of space travel and living, climate change and ecology, health, wellness and spirituality. Aside from ground-breaking innovations, there will also be special workshops and talks from the world’s greatest minds.

Children aged three to ten can enjoy an open-world experience at the Future Heroes environment, a dedicated area designed to encourage little ones to tap into their potential.

The Museum of the Future is the latest in a long line of successes for Dubai – which was recognized as both the World’s Leading Business Travel Destination and Middle East’s Leading City Destination by voters at the World Travel Awards last year.

Museum of the Future ticket prices start at AED145 per person, while children under three can get in free. Emirati citizens over the age of 60, people with disabilities and one accompanying caregiver can enter free of charge.

Andaz to debut in Thailand at the One Bangkok