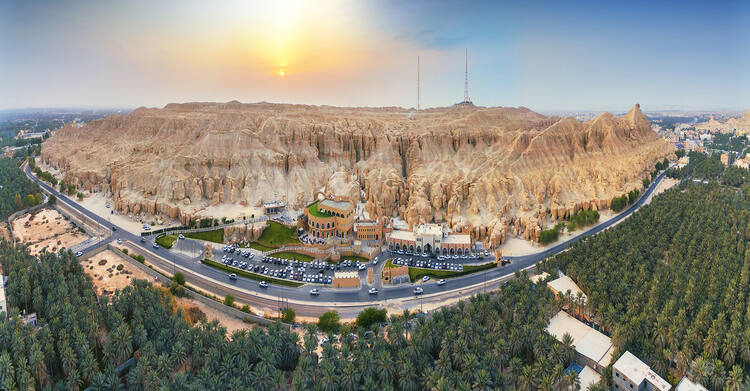 Held under the auspices of Prince Badr bin Muhammad bin Abdullah bin Jalawi Al Saud, Governor of Al-Ahsa, the conference aims to showcase Al-Ahsa’s beauty to the Kingdom’s investors and international operators, while promoting the Saudi Arabia’s desire to do business with the rest of the world.

The conference is holding sessions designed to demonstrate the value of investing in the region and discuss and promote the investment process. The two-day conference also features a tour of the region’s Al Qarah Mountain.

Prince Badr said: “Destination Tomorrow in Al-Ahsa highlights the landmarks of our country and its tourism achievements.  Al-Ahsa is a place where we celebrate sun, sand and water. It is one of the most promising, creative cities and was recently celebrated as the capital of Arab tourism in 2019.

“Al-Ahsa is on the World Heritage List, a worthy global recognition for its great historical value and archaeological sites. We are also proudly on the Unesco Creative Cities List in the field of handicrafts and folklore. Al-Ahsa will continue to grow with a sense of renewal – with the aim to preserve its culture and heritage.”

Princess Haifa said: “Destination Tomorrow Al-Ahsa is the first in a series of tourism investment conferences that we will hold in tourist destinations that have been identified in the National Tourism Strategy.

“We are here to learn about what we need to enhance investment opportunities, overcome obstacles, and most of all, open a constructive dialogue with investors. The most beautiful thing about Al-Ahsa is its people who are ready to continue investing in the area. The foundations are already here to advance national tourism to international levels.

“The Ministry of Tourism, our partners throughout the sector and government agencies are here to listen, support and explore huge investment opportunities in the region. Together, we realize the importance of communicating with investors as we continue to work with them in order to develop and empower the tourism sector and ensure its growth and prosperity.”

The event will also see attendance from key government representatives, speakers from major hoteliers, including Accor, the Radisson Group and Intercontinental Hotel Group, and consulting bodies such as PricewaterhouseCoopers.

Mahmoud Abdulhadi, Deputy Minister for Tourism Investment Attraction, said: “This is a fantastic opportunity to help to create a constructive dialogue with all key stakeholders and generate a deeper understanding of Saudi Arabia’s tourism investment opportunities.

“By attracting tourism investment in the Kingdom, we can not only continue to build our tourism offering and support our Vision 2030 targets, but we can provide travelers and consumers with a greater choice.”

Destination Tomorrow Al-Ahsa builds on the Kingdom’s strong track record of tourism investment attraction. The Ministry of Tourism is working with both private and public sector partners, internationally and domestically, to increase infrastructure and visitor capacity. In 2021, the Kingdom had $5 billion of committed capital coming into the tourism sector and increased airport capacity by 100,000 passengers per annum.

Major hospitality players are investing heavily in Saudi to establish a first-class, luxury tourism infrastructure, with a target of over 55,000 additional hotel rooms by 2025 with considerable expansion from Accor, Louvre, IHG, Hilton and others.