AlUla Moments gear up for its biggest event weekend 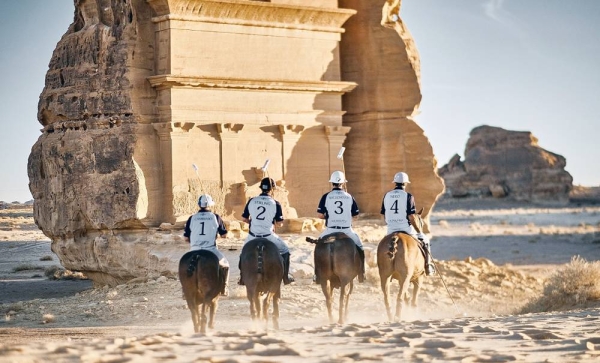 Saudi Arabia’s AlUla is embarking on the biggest weekend of its AlUla Moments season with flagship music concerts, desert polo and art shows on the list. Building on the success of Winter at Tantora – AlUla Moments is AlUla’s new events umbrella introducing four distinct new festivals for 2022.

Winter at Tantora was the first festival of the four and offered an exciting mix of music, cultural and equestrian events. The festival finale includes this weekend’s exciting second edition of the Richard Mille AlUla Desert Polo on February 11 and 12.

AlUla Arts – the inaguarul festival dedicated to the arts – commences on February 11 with the public opening of Desert X AlUla 2022 and What Lies Within and a special “One Night Only” performance by international superstar Alicia Keys.

Richard Mille AlUla Desert Polo 2022: Organized by the Royal Commission for AlUla in partnership with the Saudi Polo Federation, polo fans and enthusiasts will be able to experience the first major polo tournament staged in the desert, the Richard Mille AlUla Desert Polo 2022. It takes place at the specially built equestrian centre on February 11  and 12. The event will see four teams compete in the desert arena that lies close to the ancient site of Hegra, Saudi Arabia’s first UNESCO World Heritage Site. Those taking part will be a mix of invited patrons and professional players drawn from the global and Saudi polo community.

What Lies Within: Works from the Basma AlSulaiman Collection: What Lies Within brings together works from the past two decades by some of the most significant artists of Saudi Arabia and its diaspora from the private collection of Saudi patron and collector Basma AlSulaiman. The exhibition is the first in a series in AlUla celebrating the legacy of pioneering collectors and patrons in Saudi Arabia, who have sparked and steered the country’s relationship with the arts, paving the way for a flourishing cultural sector today.

Cortona on the Move: Past Forward – Time, Life and Longing: AlUla plays host to an innovative photography exhibition from February 9 to March 31, featuring the work of 19 photography artists from the Kingdom and from around the world. As part of the AlUla Arts festival, AlUla has collaborated with Italy’s Cortona On The Move, the acclaimed Italian festival of documentary photography, to curate a special site-responsive experience in AlUla’s new AlJadidah village.

Alicia Keys in Concert at Maraya: The awe-inspiring mirrored event venue, Maraya, will host American musician, singer, songwriter and multi-Grammy-award winner Alicia Keys for a special “One Night Only” performance on February 11. The intimate performance presented by Good Intentions will be in support of her new release KEYS.

Good Intentions – Women to Women dialogue hosted by Alicia Keys: Alicia Keys will host an invite only Town Hall event entitled “Women to Women,” in a dialogue with the first female Saudi Ambassador to the US, HRH Princess Reema bint Bandar Al Saud. The conversation with female entrepreneurs, business owners, creatives, artists and the welcoming and inspired women in AlUla about power, purpose and progression.  This companion event intends to spark meaningful dialogue and provide an open and honest venue for women to share world visions, dreams, and support for each other.

Oasis Reborn Exhibition: Explore the works created by artists Rashed AlShashai, Sara Favriau, Muhannad Shono, Talin Hazbar, Laura Sellies and Sofiane Si Merabet following their research-based residency in AlUla. Their beautiful works are displayed in a date farm in central AlUla, Mabiti AlUla, the result of immersion in the landscape and interaction with the AlUla community, researchers and scientists who are investigating the region’s oases. The Oasis Reborn Art Residency and Exhibition is in collaboration with Afalula runs from 8th February to 31st March 2022.

AlUla Performing Arts Festival: As part of the AlJadidah art hub, the inaugural AlUla Performing Arts Festival will entertain visitors and locals from February 13 to 22. The festival will take place in the roads of AlJadidah village, where a mix of international and local artists will delight crowds for ten days from 6 PM to midnight. There will be acrobatic performances, buskers, musical groups, street theatre, poetry and much more. Stand out performances will include well-known Saudi sand painter Alaa Yehya, with a performance that will tell the story of AlUla’s history. Activities will also include a live calligraphy show by Shaker Kashgari, one of the most influential live Arab calligraphy artists. Furthermore, each night Deya Rambo will be creating new art dedicated to different themes that will showcase his unique style that takes graffiti culture and fuses it with his own Saudi twist.

Dining and Adventure: From a farm to table restaurant in the oasis to dramatic cliff-top dining with amazing views of AlUla, there are more than 15 new eating experiences available for visitors to refuel and get back out to experience the new arts events in AlUla. While new adventure experiences include an extended zipline, the exhilirating new Via Ferrata zipline and new hikes, camps and walks.

Located 1,100 km from Riyadh, in North-West Saudi Arabia, AlUla is a place of extraordinary natural and human heritage. The vast area, covering 22,561 sq km, includes a lush oasis valley, towering sandstone mountains and ancient cultural heritage sites dating back thousands of years to when the Lihyan and Nabataean kingdoms reigned.