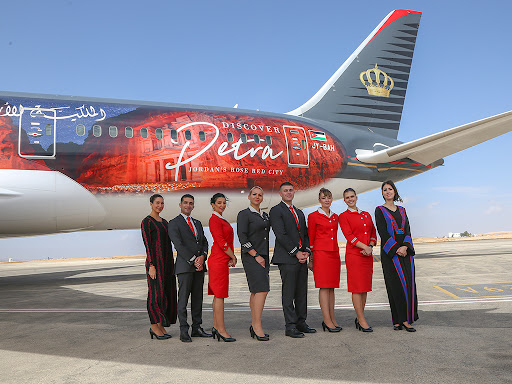 In a move aimed at projecting Jordan as a tourist destination, Royal Jordanian (RJ), the national carrier, has placed Petra-inspired livery on one of its wide-bodied 787 aircraft.

Majali said: “Since its establishment 58 years ago RJ has assumed the responsibility of promoting Jordan’s tourism at home and abroad. As the national carrier RJ feels it is its duty to act as a bridge that connects Jordan to the world, and thus it has become the roving ambassador of Jordan.”

The project was implemented in co-operation with Jordan Tourism Board to promote the red-rose city of Petra, which is a landmark in Jordan and became a destination for tourists.

Majali also urged the public and private sectors to exert more efforts to help this fundamental sector thrive, mitigate the losses it sustained as a result of the Covid pandemic and help it recover.

The airline also presented the improvements on meals added to its economy class menu, which include international, Oriental, Mexican and Italian food. The meals change every two weeks and according to the destination.

Majali said that the improved menu came in response to passengers’ demands and recommendations sent to Royal Jordanian through different channels.

He added that RJ will continue to serve a diversity of hot meals to the Crown Class passengers on all its routes.

Qatar Airways to return to Windhoek in June