Lufthansa Economy to get ‘Sleeper’s Row’ on long-haul flights 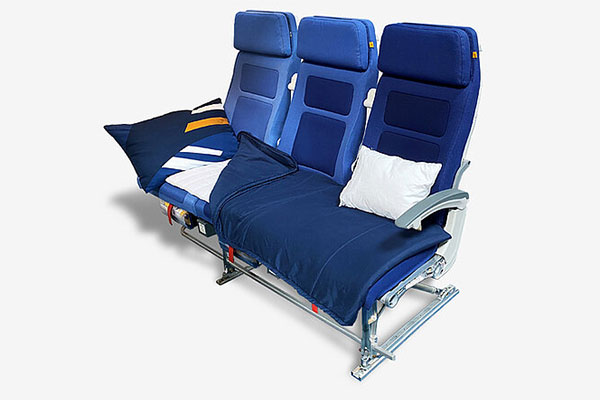 Passengers who are traveling with a Sleeper’s Row ticket will also receive a comfortable pillow, blanket and mattress topper, allowing them to fully relax while on board and before reaching their final destination.

The safety during the flight is ensured by a special seat belt, which remains fastened even when the passenger is lying down, including separate safety instructions. Additionally, passengers who book a Sleeper’s Row will avail priority boarding.

The new service will be on offer on long-haul flights of approximately eleven hours or more. This includes routes to the Far East (Singapore), the United States’ west coast (Los Angeles), Central and South America (São Paulo) or southern Africa. Passengers will have to pay between 159 euros ($188) and 229 euros ($271) for a Sleeper’s Row depending on the route. A maximum of three Sleeper’s Rows will be offered per flight and reservations cannot be made in advance .

The new Sleeper’s Row was tested by the airline on its Frankfurt – São Paulo – Frankfurt route for several weeks last year and it received positive feedback from passengers and was in high demand.

The airline says that the Sleeper’s Row is a further step towards more product diversity in Economy Class to meet passengers’ wishes for more comfort and individuality.