Iraqi Airways receives its first A220-300 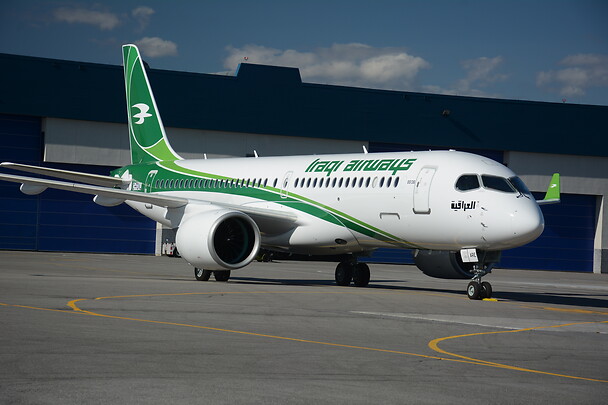 Iraqi Airways, the national carrier of Iraq, has taken delivery of its first out of five A220-300, becoming one of the first airlines to operate the A220 in the Middle East region.

With the A220, Iraqi Airways will benefit from the aircraft’s exceptional technical, economic and environmental performance. Iraqi Airways’ A220-300 features a modern and highly comfortable dual-class cabin that seats 132 passengers; 12 in business class and 120 in economy class. The state of the art aircraft will play an integral part of Iraqi Airways fleet renewal and modernization plan.

The A220 is the only aircraft purpose-built for the 100-150 seat market and brings together state-of-the-art aerodynamics, advanced materials and Pratt & Whitney’s latest-generation PW1500G geared turbofan engines. Featuring a 50 per cent reduced noise footprint and up to 25 per cent lower fuel burn per seat compared to previous generation aircraft, as well as around 50 per cent lower NOx emissions than industry standards, the A220 is a great aircraft for regional as well as long distance routes operations.

As of the end of November 2021, over 180 A220s had been delivered to 13 operators, from Asia, North America, Europe, Africa and the Middle East – proving the great versatility of Airbus’ new generation single-aisle family member.

Emirates’ flagship A380 returns to Narita to meet demand