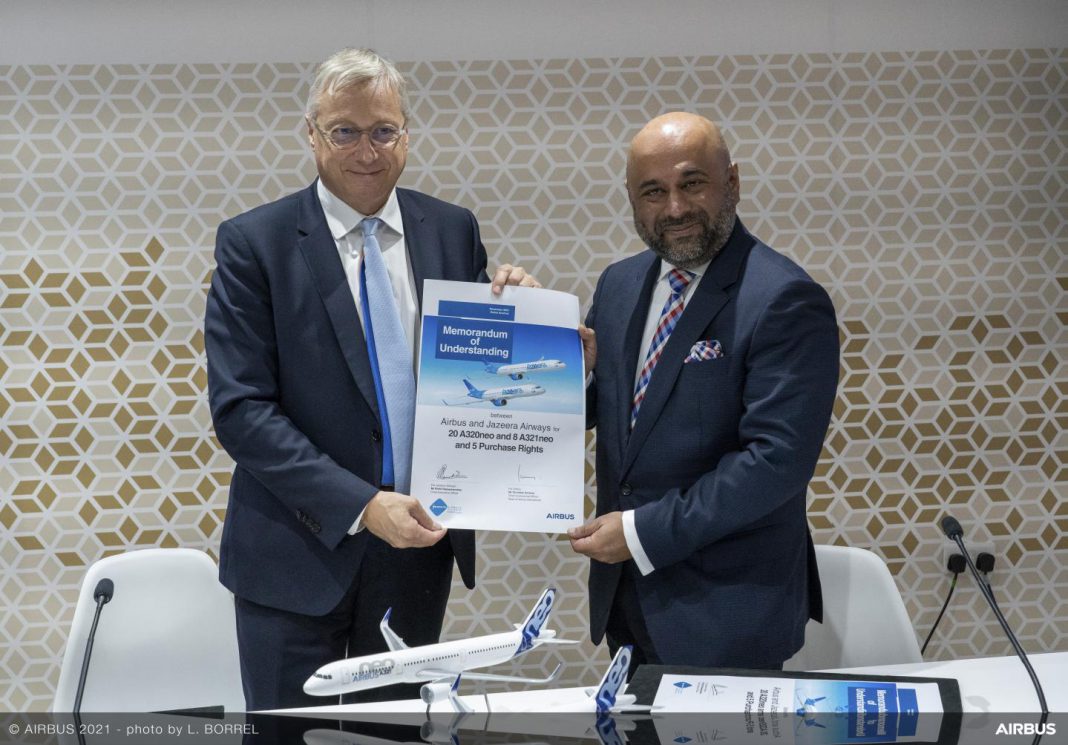 Airbus won its third deal of the Dubai Air Show valued over $3.3 billion to sell 20 A320neos and eight A321neos to Kuwait’s Jazeera Airways.

The European plane maker’s agreement includes 20 single-aisle A320neos and eight A321neos, which competes directly with Boeing’s 737 Max, along with an option to sell another five new planes to the low-cost, fast-growing airline.

“Now is the right time to evolve, grow and invest in the future,” said Rohit Ramachandran, CEO of Jazeera Airways, calling it a “realistic, modest” order. The executives said the first planes should be delivered in 2026.

“By taking both A320neo and A321 neo options we will have great flexibility to extend our network to medium and longer haul destinations from Kuwait, offering passengers more choice to travel and enjoy popular destinations as much as underserved ones” he added.

Marwan Boodai, Chairman Jazeera Airways said, “Jazeera Airways is pleased to extend its long-term relationship with Airbus further with this significant new order. We will effectively double our current fleet size to 35 aircraft by 2026. The airline has pulled out of the pandemic strongly in Q3 with a return to profitability.  We have exciting expansion plans ahead, which will further boost our contribution to the Kuwait economy and in particular the travel sector.”

The A320neo Family incorporates the very latest technologies including new generation engines, Sharklets and aerodynamics, which together deliver 20 per cent in fuel savings and CO2 reduction compared to previous generation Airbus aircraft. The A320neo Family has received more than 7,400 orders from over 120 customers.

The show in Dubai sees a stream of order and product announcements. On the first two days, Airbus also made blockbuster sales. Airbus clinched a major deal on Monday valued into the billions of dollars to sell 111 new aircraft to the Air Lease Corporation.

Airbus boosted its order book on the opening day of the show with the sale of 255 new aircraft to Indigo Partners’ various low cost carriers – a deal valued at some $30 billion, based on the pre-pandemic price list.

Michelin Guide to unveil its first selection in Dubai this year